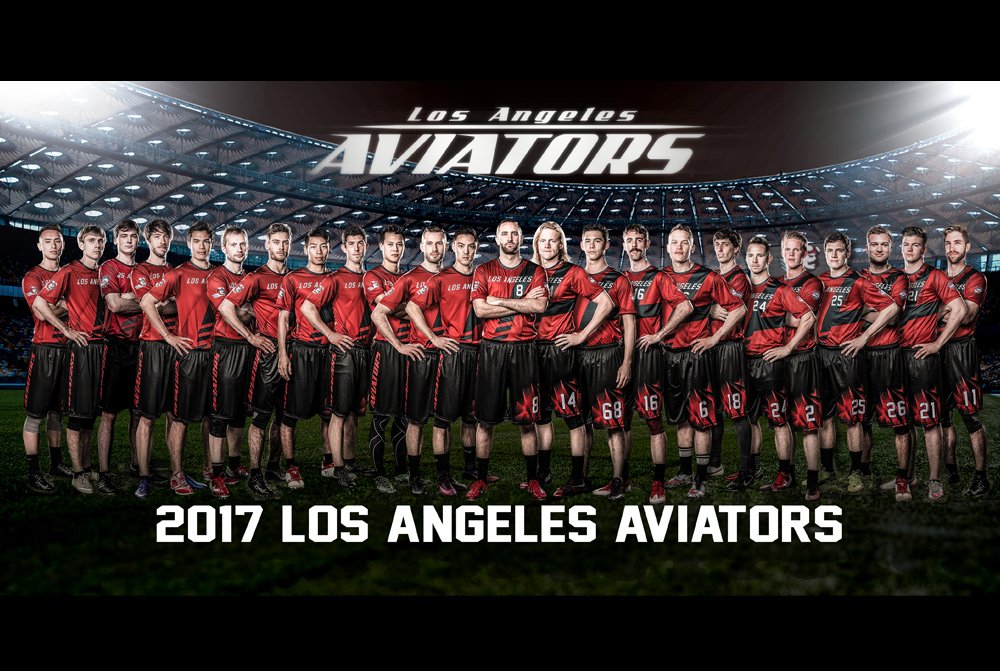 As the 2017 season of the American Ultimate Disc League quickly approaches, the Los Angeles Aviators look forward to presenting their fans with a revamped roster. With the loss of a handful of veteran leaders comes the gain of a combination of all-world talent, young and explosive athleticism, and raw, hardcore intensity. Here’s a look at the players who will be exploring the skies for the Aviators this season:

The captaincy roles fall upon #68 Allen Lai,  #1 Michael Kiyoi and #14 Mitchell Steiner this season. Lai has proven to be one of the most reliable offensive players in the region over the last decade. His composure and execution in every situation gives the team a level of confidence that is invaluable during their possession of the disc. And his sporadic-albeit-opportune highlight-reel capability provide an unrivaled spark to the attitude of the team. Kiyoi has the chance to start a season at full strength for the Aviators for the first time in his three years with the team. His experience with success up and down the West Coast (including being an AUDL champion with the San Jose Spiders) is a rare and precious commodity when looking for someone to fill a leadership role. Filling the position of alternate captain is #14 Mitchell Steiner. If Charles Barkley played ultimate, he would be Mitchell Steiner. A sturdy physique should not be as fast, agile, and vertically-inclined as it is in Steiner. When his performance (and energy) peaks, it is difficult to match up against. 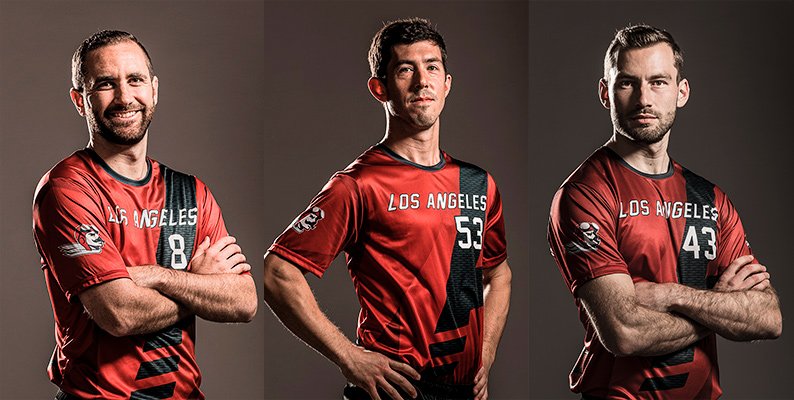 The starting offense remains relatively unchanged compared to the 2016 Aviators squad. Reigning All-AUDL star #8 Mark Elbogen provides everything you hope for in an MVP-candidate player: huge layouts, towering grabs, straight-out-of-a-canon bombs downfield, and the occasional hammer here and there just to keep the defense honest. #53 Eli Friedman had a full preseason with the team, fueling what should be an opportunity for his Callahan-winning skills to shine in the lights of the AUDL. In the offensive backfield are #6 Steven Brooks and #22 Tim Beatty, both of whom are in their second season with the team and look to develop more in their individual roles. Brooks has a long history of playing alongside #43 Eric Lissner, and that became very apparent at times during 2016. Beatty was in and out of injury problems last season, but it is difficult to keep gunslingers hidden on the sideline. Their targets downfield are not lacking in variety. #3 Brent George is always open. Always. What was originally declared a mysterious occurrence is now commonplace certainty. #12 Bryan Nguyen is one of the fastest players in the league, in both of the directions of laterally scorching the turf, and bounding upwards off of it above defenders’ heads. Additionally, Lissner rivals Elbogen as one of the most well-rounded athletes on the field, but has no competition in confidence. His disc-high poses after scoring goals and walk-offs on goal-scoring hucks are the stuff of legend.

The defense returns speed, athleticism and intensity in droves. The spirit and heart of the defense comes from #22 Zac Schakner. As he deals with some personal situations this season, his mere presence on the roster is enough to motivate his teammates towards the play-making inclination, regardless of how much playing time he can manage. The ground #80 Brandon Severson makes up on certain plays is LeBron James-esque. Most with his speed rely solely on that gift, but it is Severson’s hunger for physicality that sets him apart. Many an offensive cutter has been thrown off their game by having another man’s body seemingly in their own apparel. 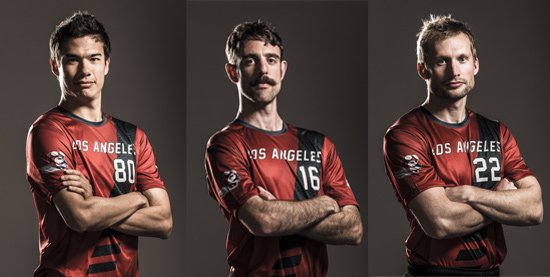 #16 Zach Theodore continues to be one of the most athletic players in the division. His combination of size and speed is comparable to only the elite, which is who he is going to find himself matched up with all season. The likes of Jackson Stearns, Trevor Purdy, Nathan White, Mark Burton, and Beau Kittredge have their work cut out for them. After a season of various physical maladies, #10 Sean McDougall put in hour after hour to bulk up and strengthen his body. The results are obvious, and his switch to the other side of the disc is sure to have major production value. #4 Andrew “AK” Kohl is a constant reminder of what youthful exuberance in the athletic arena looks like: a combination of crazy athleticism with no regard for life and limb. #7 Andrew Padula and #26 Sam Plasman have put in their time as practice players and spot-roster players over the last two seasons and are looking to use that experience to create some quality opportunities this season.

The real excitement this season comes from who is new to the roster. As the only true addition to the offensive side of the disc, #21 Caleb Ferguson has the opportunity to learn the ropes from the offensive line veterans, preparing him and his wide array of throwing skills for many future years to come with Los Angeles. Defensively, the excitement is unrelenting. And it starts at the top. #9 Tom Doi 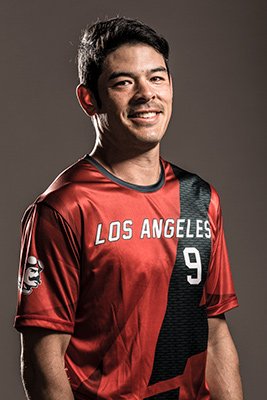 is a World Champion with Team USA, and you would be hard-pressed to find anyone else who brings more experience playing ultimate at the highest levels than Doi. If the preseason was any indication, the rare moments that Doi and Friedman could possibly be on the field together would be remarkable for their seamless flow and effortless beauty. #0 Ted Barnett was recently a member of the Dallas Roughnecks, the 2016 AUDL Champions. As a result of his work and experience, there are some aspects of the game that seem to come incredibly easy for him, almost to a fault. His anticipation of the next play will be constantly pushing his teammates to be training that part of their mental game. #18 Aaron Weaver brings the crazy. You would never want to play against him, but he’s the best teammate you could possibly hope for. He thrives off of intensity, both of whatever the situation may be, and what his teammates are bringing to the table. That intensity breeds confidence, and that confidence begets big plays. #11 Alex Drum has spent the last year-plus putting more work into his game than arguably anyone in Southern California, and it has paid off with a consistency of pressure defense and reliability on offense that are crucial for defensive line players. #5 Joe Forbes will sound familiar to Los Angeles fans as a member of the inaugural 2015 team. He returns with one of the most fearsome forehands you’ve ever seen, making him a huge asset on the pull and on fast break opportunities. 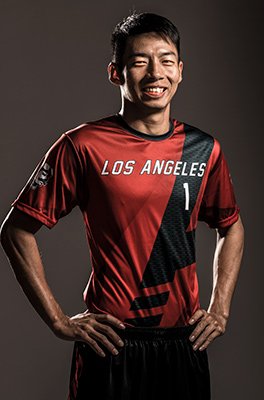 #57 Kuo Hsun Wang is the first player from Taiwan to ever make an AUDL roster, and he has definitely earned the right to show off his skills while representing his country. Described as “springy”, Wang will be making opposing offenses look over their shoulder constantly with his willingness to go after and lay out for everything that could possibly be within range.  Along with Ferguson, the last four players rounding out the roster spearhead the youth movement and the future of the Aviators franchise, each of whom is 23 years of age or younger. #34 Jacob Bartholomew is a speed demon, hitting another gear when the disc is in the air and honing in on it like a heat-seeking missile. #25 Nate Ransom has a motor that never stops and a determination that makes you question the sanity of athletes at times. #23 Matt Theologidy is easy to underestimate at first, but once he makes you look foolish a couple times you step your game up and realize it still isn’t enough to prevent his layout blocks and leave-you-in-the-dust cutting. #2 Josiah Mort has been playing at the highest levels of the sport since he was in high school. His size, speed, and ever-improving throwing skills make him one of the top young prospects in the league.