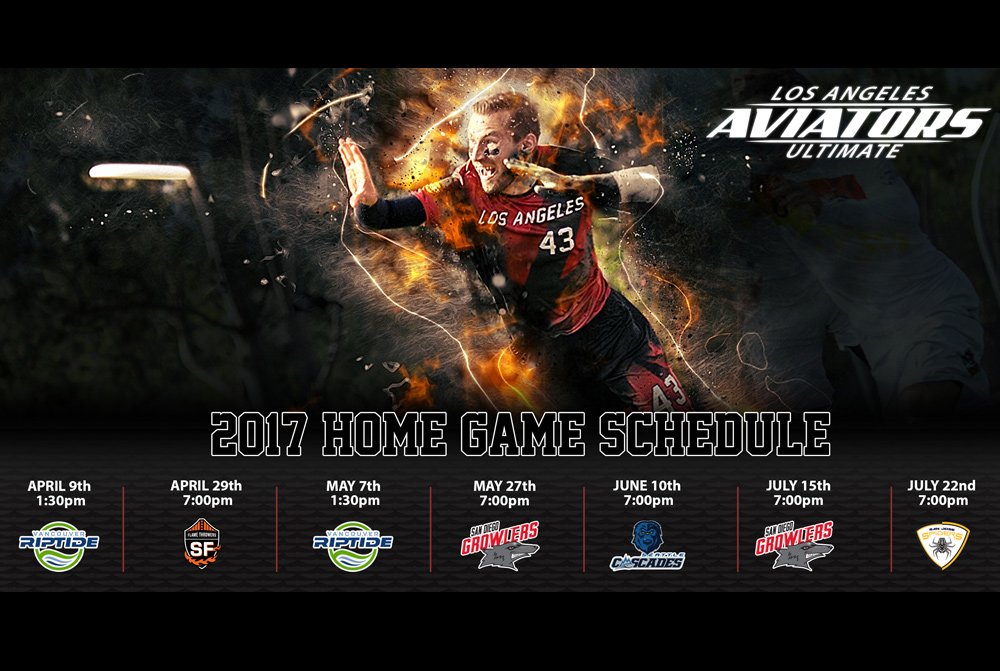 With only 6 teams in a division, and the brutal double header away games, the AUDL schedule can be an important indicator on how a team’s record might end up.

The Aviators open the season with a road game to their So-Cal Rivals the San Diego Growlers on Saturday, April 1st.  What will surely be an exciting game with roster changes on both squads, the winner will most likely be the team that can shake the cobwebs early, settle in and show up the most prepared.  The hostile San Diego crowd can be a factor, but the Aviators will be ready to go!

Los Angeles’ home opener will be Sunday, April 9th at Occidental College when the Vancouver Riptide fly down to do battle in the skies.  Sunday games can usually mean disaster for the visiting team, but Vancouver will not have a game the Saturday before, so expect a fired up, well rested Riptide squad looking to avenge 3 straight losses to the Aviators in 2016.  This will be a game you cannot miss!  Tickets are $12 online and $14 at the door, so buy early!

Most notably in the 2017 schedule are the string of away games in June and early July.  The Aviators will play at home on June 10th against the 2016 division champions the Seattle Cascades, and then travel to the PNW to play a double header against Vancouver on June 24th, and then Seattle on June 25th.  While the Aviators performed amazing on the road last year, we can only hope they can repeat that road game success in 2017.  Continuing their road games, they travel once again to San Diego to take on the Growlers July 8th.

Luckily for the fans, the Aviators finish the 2017 regular season with 2 home games.  They meet for the 3rd time in the season the Growlers on July 15th, and then the Spiders crawl into town on July 22nd for the last regular season game of 2017.

The Western Division is always hotly contested and predicting the playoff teams is as good as flipping a coin, so make sure you are there to cheer on the squad and help the Aviators to victory!

Season tickets and single game tickets are on sale now!