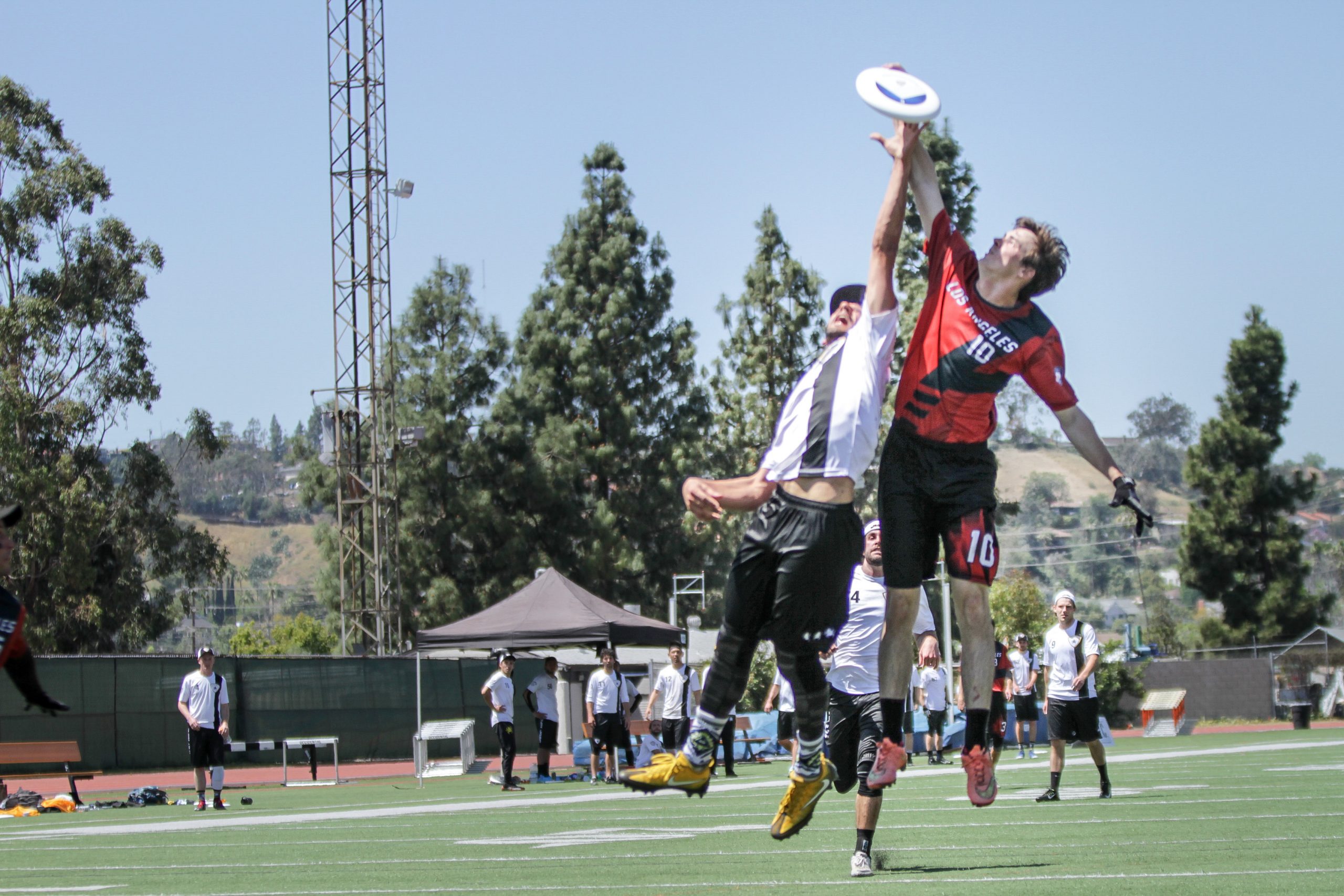 Staving off heat and working through a modified game day roster, the Los Angeles Aviators (2-2) overcame some early offensive difficulties to defeat the San Jose Spiders (1-2) on Sunday afternoon, 25-16.

“Sometimes you have to accept you can’t win all the time.” -Lionel Messi; Argentinian Soccer Player; 5 Ballon d’Or awards.

Hard work, preparation, determination, win at all costs, learn from losing, yada yada yada. Something along the way motivates an athlete to “Turn it on,” “Flip the switch,” or “Be in the zone.” Whether within a lone individual, or coursing through an entire team, the change can be sudden, overwhelming and inexplicable. One need look no further than Sunday’s game.

For the second straight divisional game, the Aviators received the opening pull, committed a turnover, and watched the other team score to earn a break point and 1-0 advantage. This time, Los Angeles gave themselves a larger disadvantage and culminated a four-minute long point with letting the Spiders score again for a 2-0 lead. LA finally broke through at the 5:37 mark of the first quarter when Steven Brooks connected with Tyler Bacon. The Aviators earned the break back at the end of the quarter to tie the game at 4-4.

The entirety of the second quarter was a back and forth exchange between the two teams. San Jose scored first and last as every point was reciprocated from one team to the other all the way through. Sprinkled along the way were a few assists by Mark Elbogen, spectacular blocks by Sean McDougall, Brandon Severson and rookie Ryan Lepore, and a by-the-skin-of-his-teeth catch by Allen Lai off of a deflected pass. Through it all the Spiders took a 9-8 lead into halftime.

What transpired next was either treacherously good luck, an assertion of dominance, or the perfect combination of both. Los Angeles scored the first six points out of halftime to take a 14-8 lead. Among the deluge was a beautiful low-release inside forehand by Nate Ransom to Zach Theodore, an aesthetically-appealing assist he would duplicate later in the game. The six-point run culminated in an authoritative sideline foot block by Aaron Weaver that was quickly converted for a goal by Michael Kiyoi. It took until the 5:31 mark of the third quarter before San Jose finally broke through on the scoreboard in the second half. Tracing back to the first half, the Spiders went 7:38 of game time without a goal. The quarter ended with an even exchange of goals and a 17-12 lead for Los Angeles.

McDougall’s sixth goal of the game gave the Aviators a 19-13 lead with 9:26 left in the game. San Jose responded in less than thirty seconds to pull within five with 8:53 remaining. The Spiders managed to earn a break on the next point, but not before more than two full grueling minutes wound off the clock. On a day in which the air temperature was in the mid 80s, the turf field felt exceptionally warmer, and the Spiders were relying heavily on a small rotation of players, that extended point may have taken all that San Jose had left. Los Angeles ran off four points in a row as part of ending the game on a 6-1 run.

Going into the game, the Aviators had to mentally prepare for a full game without several key members. Among the regular players missing in action were Tim Beatty, Jesse Cohen, Tom Doi, Eli Friedman, and Jeff Silverman. L.A.’s slow start to the game could be attributed to this, requiring a full half for the squad to develop a flow together. In the end, McDougall finished with six goals, Weaver had four, Brent George tallied three, Kiyoi and Caleb Ferguson each had a pair, and eight others had one apiece. The assists were equally spread out, with five (5!) players gathering three each (Bacon, Brooks, Elbogen, Chris Mazur, Ransom), three players dishing out two (Alex Drum, McDougall, Matt Theologidy), and four players notching one (Kiyoi, Eric Lissner, Severson, Theodore). When the statistical distribution is spread that far and wide, it’s no surprise that the game result is victory. San Jose relied on a small handful of players (Falat, Crawford, and Earley) for almost all of their production which, given the warm weather conditions, was surely a factor in their second-half faltering.

Psychologically, seeing a team display any sign of weakness creates a primal instinct within athletes to attack more ferociously (think “Finish Him” from Mortal Kombat). Confidence spikes, worry dissipates, the field becomes more in focus, throws are easier, the basket looks bigger… You get the idea. The energy and subsequent joy on the Los Angeles sideline only increased as the game went on. As 3-time tennis major champion Arthur Ashe said, “You are never really playing an opponent. You are playing yourself, your own highest standards, and when you reach your limits, that is real joy.”

After a bye this week, the Aviators have a rematch with the Spiders on Saturday, May 5 for the AUDL’s Game of the Week, which will be live-streamed via Stadium.