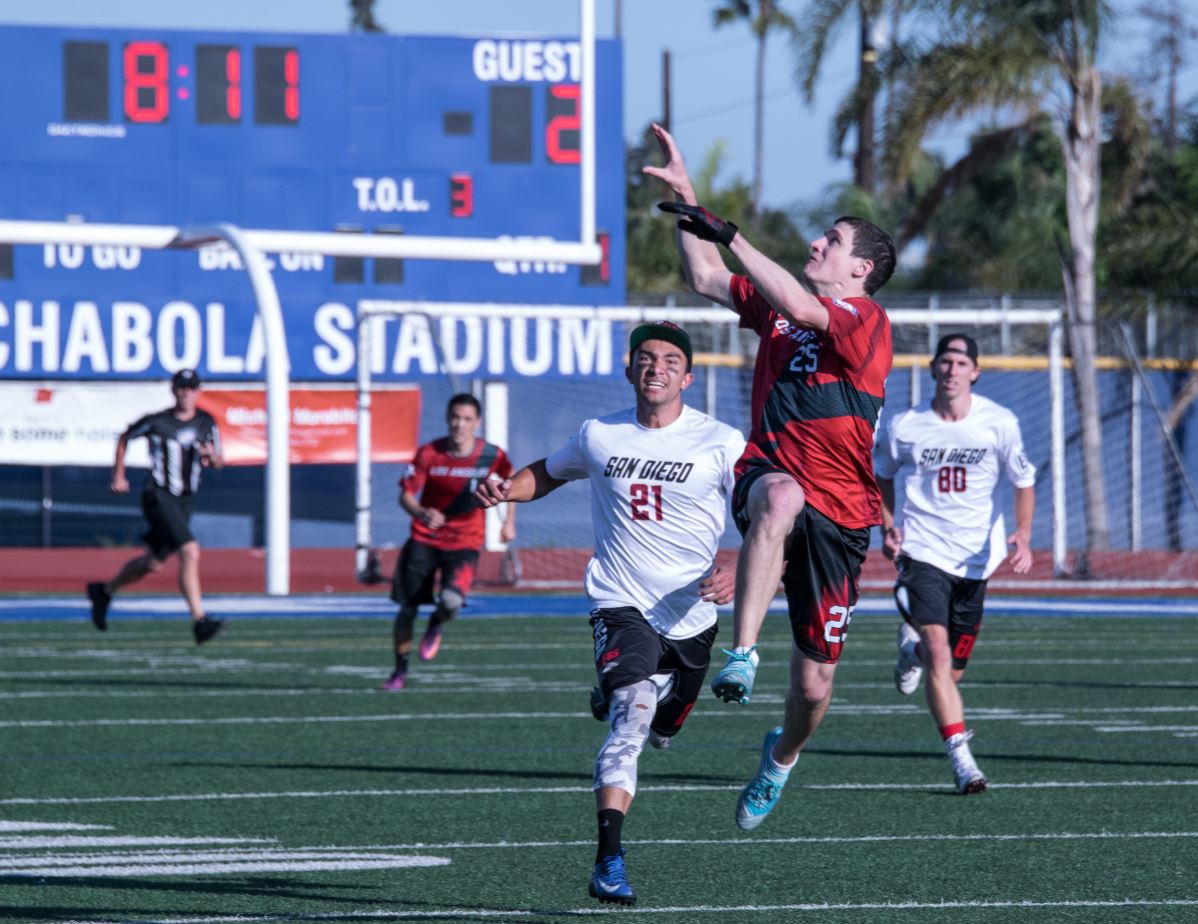 “The Catch” is a phrase that conjures two very distinct images in the minds of avid sports fans. 1954 World Series, Willie Mays and Vic Wertz. 1982 NFC Championship Game, Dwight Clark and Joe Montana. For those that were in attendance in last Saturday’s 25-23 victory over the San Diego Growlers, Sam Plasman of the Los Angeles Aviators may have added his own name to that esteemed list. (Video here.)

After a first half relatively devoid of the spectacular, the score stood 12-11 in San Diego’s favor. The Aviators started the 3rd quarter on defense looking to make a big play early to get some momentum going. As San Diego started to move the disc forward, a short dish pass intended for a forward-moving handler carried a little too far upfield. Plasman, in position and anticipating the play, easily reached out and swatted the disc down. He immediately charged to the end zone, first on a vertical line, then veering to his right towards the wide open space on that side of the field. Matt Theologidy hurried to the disc and without hesitation lofted a forehand out into that open space. As Plasman adjusted his route towards the disc, it was clear he had his trailing defender easily beat, and as he rose up the catch appeared secure. However, another defender had left his defensive assignment and began to chase down the disc from behind. His line carried him right into Plasman, who at this point was now in midair at the apex of his jump, disc in hand. The resulting collision was equal parts spectacular and horrifying. Plasman had jumped up off of his left foot, bringing his right foot up to balance him through his flight. That right leg is what took the brunt of the contact with the defender. With his right foot now propelled straight up into the air, Plasman appeared to be executing the most unexpected, violent scissor kick in history. Since that was obviously not his intention, the control he had of his body vanished and he plummeted to the turf. Should any one point of his body suffered the full force of the fall, the result could have easily been anything ranging from a shattered wrist, dislocated shoulder, broken collarbone, or fractured hip. Somehow, he managed to land the entire left side of his body at once, spreading the force of impact through a much wider surface area. (Science!) Plasman rolled over, proceeded to pop right up, show the disc off to his teammates and fans, and run off the field to an ovation from the crowd and a short lift from teammate Alex Drum.

Whether the game actually turned at that moment is debatable. San Diego proceeded to score 5 of the game’s next 6 goals to take a 17-13 lead with six minutes remaining in the third quarter. The same four-goal margin existed at 19-15 at the 2:51 mark. Then things changed, and the Aviators found themselves pulling off their best Golden State Warriors impression.

Over the last two seasons, the best team in basketball has used the third quarter as their own personal nail-in-the-coffin, soul-crushing happy place. Their scoring margin this year was +5.1, and last year was +5.4. No other team during that time had a third quarter margin higher than 2.3. Five points may not seem like a lot, but to put that in perspective, quick math extrapolates that to a 20-point margin over the course of an entire basketball game. Whether they enter the quarter trailing and exit with a lead, or enter with a lead and exit with a much more substantial lead, the third quarter is where opponents’ hopes and dreams for victory go to die.

On their home field this year, the Aviators have performed similarly well out of halftime. In their home opener against the Growlers, they won the third quarter 8-3.  In their next two, against the San Jose Spiders, the margins were 9-3 and 8-5. By that 2:51 mark, San Diego had outscored Los Angeles 7-4 in the quarter. Well, that just could not be allowed to stand. How’d it begin? The customary recipe for Aviators success: Disc in the air, Sean McDougall in pursuit. Jesse Cohen saw Tyler Bacon racing deep behind his defender. Cohen launched a backhand that carried sixty yards down the field. But by the time the disc had dropped back down to catching height, Bacon was swarmed by three Growler defenders. One of them, Will Turner, timed his jump better than the rest and deflected the disc away from the crowd. Enter McDougall. When the throw went up, McDougall was 15 yards behind Bacon, and half a field over. By the time the disc was tipped, he had closed to be even with the pack, though a step or two away. As the disc changed direction, so did Sean. Revving up his legs into high gear, McDougall charged around the group, adjusted his approach angle, and dove past Turner, the only defender who had any remaining forward momentum. “McDougall Makes Diving Save Off Deflection” is becoming routine these days. And in this case, it was a necessary shot in the arm, providing the initial spark for the Aviators’ comeback plans.

19-16, 2:10 left in the third. Aviators pull. Growlers work for a few throws until a perceived opening down the backhand side. How Zach Theodore stayed hidden from view, the world will never know, but he easily stepped in front of the receiver for the interception. Several throws later, he was receiving a pass from Kiyoi in the end zone to cut the lead to 19-17 with 1:32 remaining in the quarter. Maybe sensing some tension and pressure, the Growlers’ next possession ended quickly with a drop of the disc. A minute and many throws later, Alex Drum found Theodore again to cut the lead down to just a single goal with seventeen seconds left in the third. With so little time left, the defense puts in a tall, zone-type of line to defend the end zone as well as possible while the offense tries to get a couple throws off in the hopes of creating an easier hail mary to the end zone. Enter Tyler Bacon, who anticipated that very thing and snagged another San Diego throw that carried just a little too far. Immediately Bacon sent the disc back the other way. The horn sounded, and the disc landed in the waiting hands of who? Zach Theodore, for his third consecutive goal in the span of 92 seconds. Has one player ever been so prolific in the history of the AUDL to score that many times that quickly? Seems unlikely. Someone do some research.

Those four straight goals not only gave the Aviators an 8-7 edge in the quarter (mildly important), but tied the game (significantly more important). Not content to settle at that point, the Aviators had the great fortune of starting the fourth quarter on offense, and it took less than a minute for McDougall and Bacon to connect for the Aviators’ first lead since they were up 7-6 early in the second. After another Growlers miscue, Nate Ransom found a diving Jeff Silverman (That seems redundant; I mean, when isn’t Jeff Silverman laying out?) for the two-goal advantage that would be the eventual margin of victory. But not before Silverman had two monster layout blocks, one on the sideline and another in the end zone, to preserve the win.

Major takeaways from this game: On a day when the offense had its struggles and the other team played better for major portions of the game, the Aviators were able to do what it takes to win. Coach Jamison Gorin summed it up in the postgame talk: “That was a true test of character for us… No matter how down we were, we were there for each other… To really be there as a team when it mattered.” Additionally, Los Angeles was the last team to score in all four quarters. With the history this team has of being miserable in those situations, this stat has been trending in their favor this year and, as underrated of a statistic as it is, finishing quarters strong is crucial towards final margins and psychological factors, and bodes well for the rest of the season.

Statistically, Theodore led the team with six goals; Eric Lissner had four goals and three assists; McDougall contributed four goals and two assists of his own, and Tim Beatty led the way with five assists. Defensively, Silverman paced everyone with three blocks, but they came in droves from everyone.

Next up the Aviators host the San Francisco Flamethrowers this Sunday afternoon in the first matchup between these two teams this season. Los Angeles enters in first place in the division, 6-2 overall but undefeated in their six divisional games. San Francisco sits in third place, 3-4 overall and 3-3 in division. The Flamethrowers are riding a two-game winning streak heading into their double-header weekend, in San Diego on Saturday and LA on Sunday.