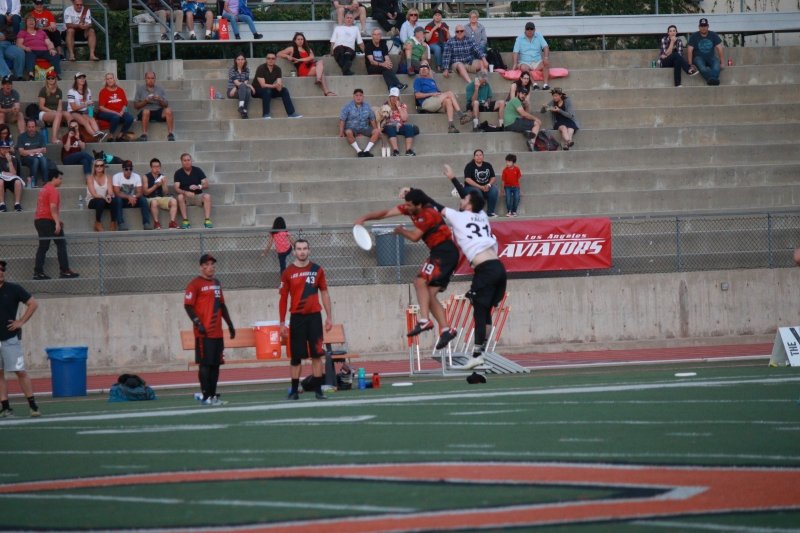 The AUDL Game of the Week pitted the Los Angeles Aviators (3-2) against the San Jose Spiders (2-4) on Saturday night, the second matchup of the season for the two squads. From opening pull to final buzzer, the teams did not disappoint as Los Angeles prevailed in the highest scoring game in franchise history, 33-31.

As has become their habit, the Aviators got off to a slow start with San Jose scoring on their opening possession, then following that up by earning a break and a 2-0 lead. The next nine points on the board alternated back and forth between the two teams before LA got their first break and tied the game at 6-6 with just under two minutes remaining in the quarter. In those first six goals, Chris Mazur had two goals and two assists, Tim Beatty had two goals and one assist, and Eric Lissner had two assists. Some stellar defense on both sides highlighted the rest of the quarter, with San Jose’s Andrew Moore getting a layout block on the first pass of one Aviator possession and turning that into a quick score, Nate Ransom poaching a lane for LA’s first break point, and Brent George almost bringing down a Callahan. Steven Brooks and Allen Lai connected for Los Angeles to bring the score to 8-7 in San Jose’s favor at the end of the first.

The exact same margin would occur in the second quarter, giving San Jose a 16-14 lead going into halftime. By then Beatty had totaled four goals, Mazur three goals and five assists, and Sean McDougall scored three of the last four Aviator goals. Unlike in the previous matchup between the two teams, San Jose showed no signs of giving in or slowing down. With a much more complete roster than before, the Spiders were able to run and take deep shots throughout the game without losing steam. Zach Sabin, a 6’4”, 24-year old rookie out of Johns Hopkins, was a critical part of that, utilizing his height and dominance in the air over and over, accumulating seven goals by the time the game ended. Ethan Falat, Sonny Zaccaro, Matthew Crawford, Jackson Stearns, Alec Surmani and Joe Thompson had their names all over the score sheet all night, making LA’s job on defense that much more difficult by not having just one or two guys to key in on the whole time.

The quarter was not without its own controversies. One Mazur huck went awry when his follow-through ended in his wrist meeting a Spider square in the jaw. Whether the defender was moving or not is subject to video analysis, but no foul was called and San Jose got the disc. On one deep shot to Sabin, it appeared likely that he gave Jeff Silverman a friendly nudge in the back to clear some space for grabbing a goal. Again, not in LA’s favor and very much to the home crowd’s chagrin. The slight was quickly forgotten on the next point when a Bacon huck to McDougall was met high and seemingly securely. However, McDougall managed just a touch to the disc before falling to the ground. Luckily, the disc followed him straight down in what was an excessively dramatic and heart-stopping moment. One that would be repeated later.

The half would end in unusual fashion, as well. After a Spider turnover with little time left, the Aviators took control of the disc and Lissner launched a throw to Brandon Severson towards the end zone. While en route, Severson got truck-sticked Madden-style and the pass fell incomplete. On this occasion a foul was called, resulting in the rarely-seen, “one untimed pass” rule. After a timeout, Chris Mazur picked up the disc and proceeded to put on a six-second clinic of how to pivot in, around, and through a double-team. It culminated in him splitting the defenders and finding McDougall for the score.

Whatever the Aviators are doing during halftime lately, it should be bottled, stored in a safe, and carried with them for the duration of the season. After San Jose held on their opening offensive point, LA scored five of the next six goals, including three break points, to take their first lead, 19-18, with 6:17 left in the quarter. It was a lead they would not relinquish the rest of the game. Along the way some fun stuff happened. Rookie Ryan Lepore scored the first two goals of his career, including a double-happiness/bookends feat late in the quarter. Zach Theodore played possibly the best minute of defense in his life, earning a box out block on a deep huck and shutting down some deft goalline cutting. That point ended with a goal of his own. Beatty made a “How’d he do that?” snag for a goal off of a way-too-low throw by Mazur. Lissner blocked a deep Spider throw, but “strip” was called and San Jose retained the disc for another goal. LA’s fourth break of the quarter gave them their first two-score advantage, 22-20, with less than a minute remaining. San Jose scored to close out the quarter 22-21, but Los Angeles used a total of four break points to win the quarter by an 8-5 margin.

The fourth quarter was one of the most entertaining twelve minutes of professional sports one could ever hope to watch. Twenty-one total points were scored. There were only three points that took more than one minute from catching the pull to scoring the goal, none of which surpassed two minutes. Eleven goals were scored within thirty seconds of receiving the pull. If you so much as turned to tell your friend how awesome the last point was, odds are you missed the next one. Which could have been either Tyler Bacon or Steven Brooks toeing the end zone lines to bring down multiple Eric Lissner hucks for goals. Or McDougall’s second heart-attack inducing tip-fall down-catch sequence. Or Tommy Adams making three separate possession-saving catches for San Jose in one flurried sequence.

The final ninety seconds of the game was a storyline to itself. With the Spiders down one and in possession of the disc, a throw approached the end zone. It missed its initial target, but Jackson Stearns made a flailing, diving effort and very nearly succeeded. Instead, he and another Spider had to leave the field due to injury on the turnover. On LA’s ensuing possession, the disc found itself in the hands of Theodore as he looked downfield. Normally, that is merely a tactic to fool his mark until he tosses a short completion on an undercut or turns and dumps the disc back to a handler. To the surprise of everyone watching, he launched a lefty flick towards the end zone. Lacking the zip and purpose of a deep throw from a more common hucker like Mazur or Beatty, the disc hung up in the air long enough for everyone’s stomachs to clench nervously. While not exactly in stride, it met Lissner at the perfect spot in the air, away from the reach of any defender. Hearts settled, and the Aviators claimed a two-goal lead with 37 seconds remaining. Mere seconds after this sequence, San Jose launched their own deep shot, hoping to score quickly and give themselves a chance on defense. The Aviators’ defense was ready, with multiple players hanging deep to prevent any such thing. As the throw sailed, the very same Zach Theodore who had just peaked and valleyed the collective blood pressure of the stadium lined up his approach to grab the disc and secure victory. He leaped, reached, and missed. The Spiders converted, and twenty seconds remained on the clock in a one-goal game.

Any historian of the Aviators will know that a one-goal lead with almost no time left on the clock is patently disturbing and likely to end in disaster. When San Jose threw their pull only a couple yards downfield and to the sideline, things seemed curious. When Steven Brooks picked up the disc and was met with a strong double-team, things turned dicey. When his pivoting deep in the stall count threw him off-balance, things became grave. And when his desperation hammer was destined to dive into the turf, things became inevitable. And then, out of the abyss, swooping through the air with the grace and majesty of the great, albeit slightly-less-wing-spanned, Condor he has been for years, Tyler Bacon plucked the disc from its sure demise, securing the goal and pummeling any chance of a miraculous Spider comeback. The last five seconds ticked off of the clock as a mere formality of an ending for the otherwise glorious plotline that came to life Saturday evening.

In the end, Chris Mazur totaled five goals and nine assists, continuing to show off his value as a veteran playmaker who fills whatever role necessary to win. When Eli Friedman and Tom Doi’s absence from the night’s game was recalled later, Mazur stated, “Those guys need to come back so I can get back to where I belong, on defense!” This much production, and he’s not even in his comfort zone. This bodes well for the long-term status of the Aviators’ season.

Six Aviators scored at least three goals, including Mazur and Beatty (5 each), McDougall (6), Brent George (4), and Bacon and Theodore (3 each). Five Aviators had at least 3 assists: Mazur’s 9, Bacon and Lissner with 5, Brooks with 4, and McDougall with 3. Team production continues to be spread around, which appears to be a trademark for this team while some of its recognizable talent still misses time. The aforementioned Friedman and Doi joined Mark Elbogen, Aaron Weaver, Michael Kiyoi and Mitchell Steiner as stalwarts missing in action. But new and young players across the board have filled in and stepped up accordingly, creating a seamless transition each game.

The Aviators sit in second place in the division, behind the 4-2 San Diego Growlers. LA’s record is misleading, however, as they have yet to lose a divisional game. They travel to Seattle to face a Cascades team that is in the middle of a transitional season. The game will feature the debut of two more Aviators rookies: Stephanie Pritchard and Veronica Eder. They will be the first women to suit up for Los Angeles and, as prominent players in the LA community, they will have a ton of support.

The Aviators follow that trip with back-to-back games against the San Diego Growlers, in San Diego on May 19 and at home on May 26 at Culver City High School.