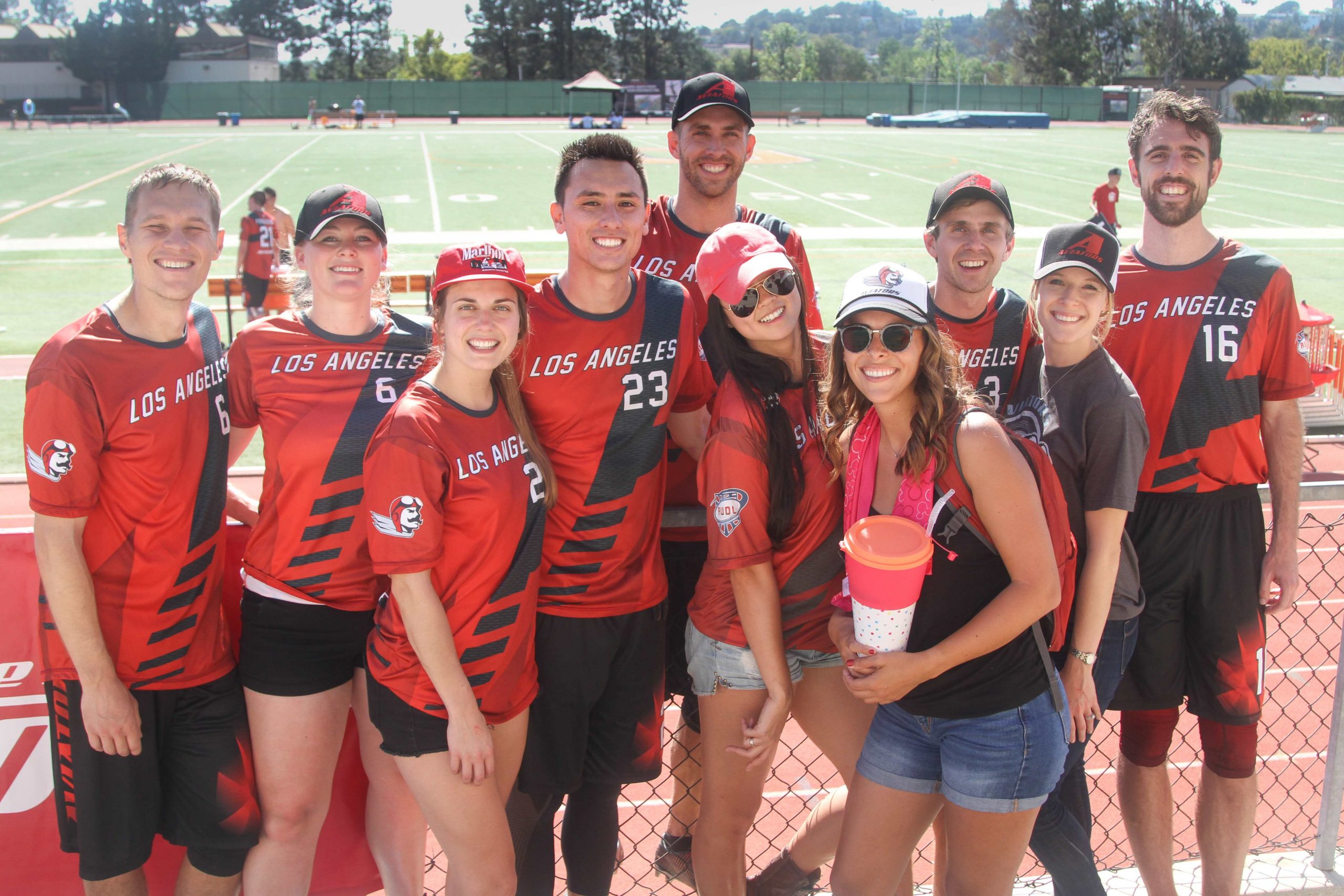 Los Angeles, CA (April 25, 2018) – Saturday, May 5th is a rematch of the past weekend’s victory over the San Jose Spiders; but this game’s stakes are much higher. This time the Aviators vs. San Jose match will be broadcast over the air via local HDTV 39-4 and broadcast on the internet via the AUDL broadcast partner, STADIUM Sports. Join the home crowd as LA attempts a repeat victory over San Jose.

The Los Angeles Aviators are undefeated at home games this season although their overall record is 2-2 after two close losses in cross-division play in Texas.

After the away games, the Aviators took care of business at home by squashing the San Jose Spiders. In the heat of Eagle Rock on this past Sunday afternoon, the Aviators soared to a 25-16 victory, after chasing San Jose who led (9-8) at the end of the first half. Aviators player Sean McDougall had a standout game with 6 goals, 2 assists, and 4 defensive blocks, and is leading the entire AUDL league in defensive blocks as well as leading the team with his solid performance.

About The Los Angeles Aviators: The Los Angeles Aviators are a professional ultimate disc team in the American Ultimate Disc League, which boasts 24 teams across 4 divisions that encompass the entire United States as well as Canada. The AUDL is now in its 7th season. The Aviators compete in the western division with teams from San Diego, San Jose, San Francisco, and Seattle. They play 7 home games at the historic Jack Kemp Stadium at Occidental College in Eagle Rock, CA and at Jerry Chabola Stadium in Culver City, CA. The Aviators offer family-friendly, affordable sporting entertainment featuring one of the country’s fastest growing sports. Please visit us at www.laaviators.com and follow us on Facebook at www.facebook.com/losangelesaviators and Twitter at: www.twitter.com/laaviators.

1) Interview with Coaching Staff, and Owners

2) Interviews with Aviators players and team captains, who can talk about the team’s season, and what it is like playing in front of a national audience

About Stadium
Stadium is a 24/7 multi-sport network, and the AUDL and Stadium have partnered up for the 2018-2019 season allowing fans to view live games from across the nation and internationally. Tune into Los Angeles’ local channel, KHIZ-4, channel 39-4 or find the Stadium channel on your local broadcast programming here. Stadium will provide live games to viewers nationwide through broadcasted television channels and an array of other methods: WatchStadium.com, the Stadium iOS, tvOS and Android apps, Twitter (@WatchStadium) and dedicated channels on Roku and Pluto TV with more complementary streaming apps to be announced.

About AUDL
The American Ultimate Disc League (AUDL) is the first and largest professional ultimate league in the world. It strives to maintain the sport’s rich history, and its 24 franchises embody the robust spirit of ultimate’s players, fans, and community alike. The league’s mission is to increase the visibility of one of North America’s fastest growing sports by creating fun, family friendly events that showcase the sport being played at its highest level.

About Aviators
The Los Angeles Aviators are the 22nd team to join the American Ultimate Disc League. We are proud to represent Los Angeles and southern California in the Western division of the AUDL. Our mission is to build a competitive team, provide a platform to elevate the visibility of the sport and all the positive values it holds as well as expand opportunities for new players and kids to play and learn about this exciting game we simply call “Ultimate”.