A famous Englishman once wrote something about the best of times and the worst of times, wisdom and foolishness, lightness and darkness, and hope and despair. He concluded that thought by mentioning superlative degrees of comparison. Of course, Charles Dickens was referring to a time around the French Revolution in his novel, but he might as well have been describing the Los Angeles Aviators’ 23-18 victory over the Vancouver Riptide on Sunday afternoon. Proof? Let’s go in reverse order:

Just over two minutes into the third quarter, Los Angeles had a 14-9 lead and pulled the disc to Vancouver. After a few throws, Brandon Severson jumped in front of a throw for a block, gaining the Aviators possession of the disc. As they moved upfield, a score looked imminent. There stood Matt Theologidy, all by his lonesome in the right front corner of the end zone. Working hard enough to get yourself that wide open is a rewarding feeling, but being that open sometimes brings with it an added sense of pressure and nervousness because making the next play is assumed to be a very easy task. So easy that it often isn’t completed, as was the case here. There are few feelings worse than dropping an easy pass, let alone in the end zone. The weight of letting down your teammates after everything they had done to get to this point, it comes crashing down all at once. Guilt, shame, and embarrassment would cripple less worthy individuals. Alas, Theologidy and the rest of his defensive line-mates picked themselves up, forced Vancouver to throw the disc away again, then proceeded to finish off the goal and achieve a five-point margin.

One of the other most desperate and disheartening feelings a player can experience on the field is time running out to throw the disc, and having nowhere to throw it. This feeling gets ramped up even more in the AUDL, where the stall count is just 7 compared to the normal 10, and there is no warning except for the hurried frenzy of your teammates yelling “FIVE!!! SIX!!!” in very quick succession at you. Your heart pounds, your mind races, the possibilities seem both endless and useless all at once. Then the whistle blows, and the disc gets placed on the turf in stinging concession. This is not normally an issue for the Aviators, but they found themselves getting stalled (or almost) repeatedly against Vancouver on this day.

When the future holds the promise of great things to come, that is hope. In sports, hope is gleaned from the potential stored up in the younger generation. Before Sunday’s game started, the Aviators held a free youth clinic for anyone between the ages of 9 and 16. As the sport continues to grow around the country and world, across ethnicities and genders, the talent level of children varies indirectly: kids keep getting better and better at younger and younger ages. No doubt that future professional ultimate players were gracing us with their presence during that time.

As for the pro ranks, Sunday’s matchup brought two significant debuts ripe with hope for the rest of this season: Sean McDougall made his first appearance of the year, his third with the organization; and Caleb Ferguson made his professional debut. On his first point, and the second of the game, McDougall 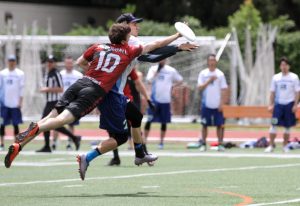 managed not just one but two different defensive blocks, and recorded the assist to give the Aviators a 2-0 lead upon starting the game with consecutive breaks. He would add two goals later in the game, showing off the fruits of his labor in regaining his health and a new level of fitness, along the way reminding the Aviators faithful of the explosive excitement he provided in his rookie season two years ago. Ferguson is a big, young handler with tons of throws in his arsenal. His first noteworthy professional moment came late in the game. On a dump throw to him, the disc began to sail away. He instinctively dove, full extension, caught the edge of the disc, then got up and threw a backhand around the mark for a score. The Aviators sideline went berserk, in excitement for the moment and for the obvious potential in front of him based on plays like that.

From well before the game started, a storm seemed imminent. As the first pull approached, fears of lightning interference became legitimate. The combination of various shades of gray and black in the sky looked like an intricate, modern, grayscale portrait. Dense clouds had blacked out the sun, and by halftime the rain had presented itself. The second half was doomed to be increasingly dim and damp. To the relief and benefit of all, the skies did not produce a deluge, and the game was able to conclude without further weather incident.

The ability to soar through the air suggests having some measure of “lightness” that is not as readily available to other people or objects. KuoShun Wang displays this ability with increasing regularity every game. This week’s exploits occurred with just over two minutes remaining in the game. Down by five and taking more desperate measures, Vancouver launched a huck downfield. The disc got caught up in the air and hovered long enough for a small crowd to gather underneath. The shortest of the group, Wang timed his jump perfectly and snatched the disc away from the several other pairs of grasping hands. The sideline, anticipating the play to be made by a teammate or, less desirably, an opponent of more significant stature, exploded in surprise and elation. After a couple throws by the offense, Wang made a mid-range cut towards the sideline. The throw fell out of reach, but the distance and arc that his bid for the disc covered showed that Wang’s ability to fly horizontally matches his verticality. 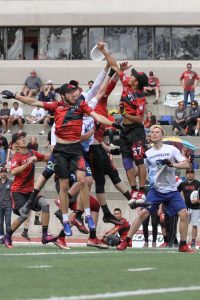 As for things that actually sustain flight in the air, the Aviators had several moments of quality disc projection. An Eric Lissner backhand deep down the sideline to Elbogen as he toed the backline halfway through the second quarter. A Tim Beatty forehand bomb to Brent George early in the second half, after playing a give-and-go version of catch around Riptide defenders for a few throws. Steven Brooks with a 65-yard laser flick to Lissner halfway through the third. An identical 65-yard forehand from Elbogen to George with three minutes left in the quarter. Then a Lissner inside-out forehand right over the middle of the field into the hands of a soaring (equal parts gratuitous and glorious) Mitchell Steiner with three minutes left in the game. And a hammer from Steiner to Michael Kiyoi as time expired to give the Aviators the final word.

Let’s just say there may have been a few too many hammers, a miscommunication on offense here and there, and a couple moments of unnecessary, albeit entertaining, physicality between the two teams. Moving on.

When wind is a factor, taking long shots in the downwind direction is generally a good decision. This truth is accentuated even more so when the likes of Mark Elbogen and Zach Theodore are on the receiving ends of these long throws, as they each were on multiple occasions. It’s a wonder that defenses ever allow such a thing to occur. Alas, we won’t complain. 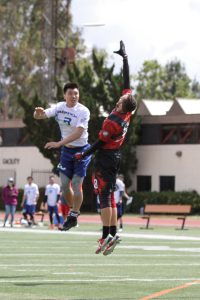 Some of the smartest on-field decisions also occur when the disc is not thrown. Giving a fake here and there is a useful tactic to get the mark to move around to open up another throw to a different space (for example, Brandon Severson to Andrew Padula early in the second quarter, leading to an easy score for Jacob Bartholomew). This is usually a mundane, unexciting exercise despite its importance and usefulness. On rare occasions, though, a fake is so well executed that the defender turns their head downfield believing the throw has actually gone off, or they leave their feet in a desperate dive to stop the throw. Tim Beatty had one such backhand fake in the first quarter that caused his defender to perform the latter. So flustered was the defender that Beatty managed a forehand fake then still got a backhand off down the sideline around the marker. The uproar from the crowd and the Aviators on the sideline was proof enough that something great had just happened.

For whatever reason, Vancouver likes to put up throw after throw, regardless of the defensive pressure or the lack of space available to throw to. In the AUDL, even with fields that are wider than ultimate fields usually are, that is a recipe for potentially exciting playmaking, but also a disastrous turnover margin. With 28 throwaways and 7 drops, the Riptide continuously put themselves at a disadvantage. Maybe as a result of knowing Vancouver was likely to turn the disc over, the Aviators were fairly loose with the disc as well. Accumulating 21 throwaways and 7 drops of their own, Los Angeles was only barely better. This makes even a solid victory feel sullied and unsatisfying.

By far the best moment of the day came at halftime. Los Angeles had arranged a short ceremony to show appreciation for their sideline statisticians. Felicia Yang, Charlie Capron and Evie Herzfeld were to be presented official team discs by players Alex Drum, Brent George, and Zach Theodore, respectively. Yang and Capron were each given their discs, had their names said over the public address system, and received a mild ovation of appreciation from the crowd. The last exchange, between Herzfeld and Theodore, did not pass as quickly. When Theodore handed Herzfeld her disc, he offered it upside down, with the underside of the disc facing her. Confused at first, Herzfeld noticed there was something written inside. “Evie, will you marry me?” was at first shocking and confusing. But when Theodore was handed a ring box and took a knee, there was no doubt. Once he made it official by asking the same question via microphone, she did likewise in proclaiming “Yes!” The crowd offered its biggest cheer of the day, the team went crazy and surrounded the two of them in a jumping, screaming mob, and one of the greatest moments in the organization’s history was enjoyed by all.

The victory propelled the Aviators to a 3-1 record, continuing the best start of the season in team history, tied with the Seattle Cascades, one win behind the San Francisco Flamethrowers and San Jose Spiders. Vancouver drops to 0-6, last in the West division and one of four teams in the AUDL still searching for their first victory.
The Aviators travel to San Jose on Saturday, hoping to upend the Spiders in their first meeting of the season. A victory would give them an edge in the season series and propel them into second place in the division. The most important storyline going into the game, though, is the return of #22 Zac Schakner. After dealing with some health issues at the start of 2017  he has put in the tireless work to get his body back to playing shape and make an impact on the Aviators’ defensive line. First pull is at 7:00 pm at Foothill College.